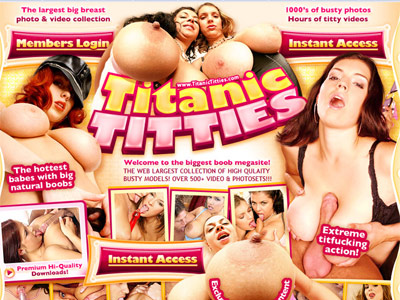 Titanic Titties is a site dedicated to hot babes of all ages with very big and juicy boobies. The hardcore action here focuses on those big knockers as they bounce, swing and get slathered in man juice in a sorts of scenarios.

16-March-2010
Anyone with a thing for ladies with big tits are going to obviously have some interest in a site called Titanic Titties. While this isn't a site that will knock you off your feet, it is a rather large one and it does have some hot content to offer you. Most of it is nonexclusive, taken from various DVDs, and a few scenes even look a bit dated from the 1990s. All that won't matter too much, since the hardcore, big boob fucking action is top of the line in each scene.

At the time of my visit there were a total of 206 movies online. These can be downloaded in QuickTime files that offer a good to great quality playback. You can also stream them online if you want. All movies are chopped up into parts. Most of them run around thirty minutes long from start to finish.

There were 50 photo galleries at Titanic Titties as well. The images are high-res and look fantastic. There are around 150 images in each of these galleries that you can browse through online. The only thing missing were zip files to download entire galleries in a single file download. The action in these galleries is similar to that in the movies.