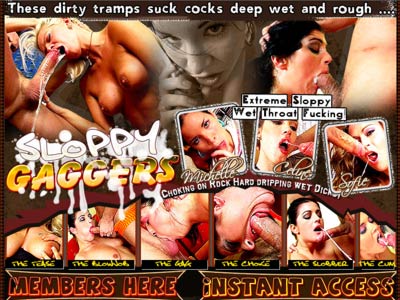 Sloppy Gaggers takes hot chicks and fucks their throats until they cough, sputter and spit all over their own faces and the thick dicks ramming into their mouths. The women here are used as objects, their mouths receptacles for precum and semen. The videos are downloadable and the ladies are exceptionally hot, which makes the site well worth a look.

General impression: Sloppy is a good word to describe what goes on at this site. At first it looks like the girls can handle the throat fucking they're getting. But the guys don't let up until they start gagging, and when that happens the mess begins. There's always tons of spit spilling from the girl's mouth as she tries to produce enough lubrication to keep his cock flowing down her throat. They always put them in heavy eye makeup as well so it will run when the inevitable tears start flowing. It's rough, randy and awfully hot.

Bravo's opinion:  Sloppy Gaggers is a bigger site than I thought it would be. There are more than 100 scenes for download and they update a few times a month as well. The site is designed in a minimalist manner with links to the bonus sites along the top of the page and the updates listed in rows of three below that. Other than that there's nothing to see, which is nice in a way. They don't bombard you with advertisements and there aren't any poorly designed graphics that need to load because they want to show you that they paid an expensive designer to muck around with their site.

Some of the updates are listed twice for some reason, and that's a little sloppy, but it doesn't happen more than a few times. In essence, at Sloppy Gaggers they want you to get right to the content so they don't put any walls in your way. You get a picture from each scene to help you choose and it always features a hot chick with her mouth full of cock. Sometimes she's actually choking on the dick at the point of the picture, which should be a nice preview for what's to come. The list the girl's name under the picture and many of the girls are well known porn sluts.

It's not all that important, but it doesn't look like they produce these videos themselves. Instead it looks like they grab them from a variety of third party sources and give them to you for download. The only downside is that the quality levels vary from scene to scene and they don't have any sort a uniting look like you see on sites that produce their own goods. It's a very minor complaint though, so just ignore it if you really like gagging/blowjob content and you liked the tour.

Most of the movies have been broken into two minute clips and are available in a full length clip as well. The average scene is about 10 minutes long; after all, it doesn't take long to suck a guy off, especially when it's as throat poundingly rough as these scenes. The movies are 480x360, which is the bare minimum you need these days. They don't look good enough if you run them full screen but at double the normal size there's very little quality loss. The high resolution clips are WMVs and they offer a 320x240 MPEG as well, but I'm not sure why you'd download that.

Sloppy Gaggers is all about oral sex, but more importantly it's about girls who have dicks forced down their throats and end up gagging on them. At least, that's what it's supposed to be about. However, some of the scenes don't really follow that theme. In very rare cases it's because the girl is such a talented cocksucker that she doesn't gag, no matter how far down her throat the dick is stuffed. In other cases it's because the video was never intended to have gagging. It's those videos that make me think they get their content from third parties.

Don't fret though; the scenes without gagging are plenty hot because the girls are skillful cocksucker. In addition, there are plenty of scenes that feature girls gagging and choking like they've never sucked a dick before. The best scenes are the ones where the guy isn't afraid to use the girl like she's barely human. He grabs the back of her head and just slams his dick down her throat with a vengeance. Only when it seems like she's going to vomit does he actually pull out. I'm actually surprised some of these ladies didn't lose their lunches. My favorite scene stars a beautiful blue eyed model named Hailey. If you join be sure to check it out.

With roughly 100 blowjob videos Sloppy Gaggers has a good collection of oral sex pleasures. Not all of those videos actually feature the kind of messy gagging and choking that was pictured on the tour, which is a slight disappointment. However, there are plenty of sloppy, messy choking chicks and you should have all the oral pleasure you need as a member. You can download the videos in parts or in a full length clip and the resolution is just good enough to pass muster. If you ever run out of content then feel free to turn to the network of 11 bonus sites that feature all kinds of hot stuff.