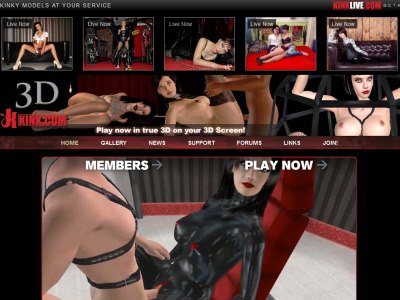 2-February-2015
Like a lot of video games, 3D Kink is Windows-only. You can play on a Mac if you have parallels or Bootcamp set up and running one of the versions of Windows that the game works on, though. The game has minimum requirements that a lot of modern computers should be able to handle, but to get the most out of the game you’ll need even better. Here’s the basic requirements:

Setting up the game is easy for anyone that’s installed games before. Playing isn’t terribly challenging, though it gets easier and easier with time. I had a real blast with all of the features of the game, especially in creating my character. I was able to design gorgeous babes right down to the shape and size of their nipples and beyond. Customize their tits, their outfits, their asses and their sex toys, then put them into kinky poses or into hardcore sex scenes.

On the site there isn’t much to go with the game, beyond some tips and tricks and screenshots from the game. They do announce the addition of new items and scenes - they had just added a kitchen setting, kitchen-themed sex toys and the ability to make anthropomorphic characters at the time of my visit, and fixed several bugs.

When it comes to kinky sex simulation games in 3D, you can count on Kink to do it right. 3D Kink is an incredibly well developed sex game with fantastic graphics, controls and options for players to tweak with. If you’re looking for a BDSM-themed virtual world to live in, you need to pay a visit to 3DKink.